Fab lab House, also called “peanut house”, “cinnamon submarine”, “forest zeppelin” or “whale belly” is a project that involved architects and experts from 20 countries and is being developed by the Institute for Advanced Architecture of Catalonia (IAAC), The Center for Bits and Atoms from the Massachusetts Institute of Technology (MIT) and the worldwide network of Fab Labs.

The house has introduced significant technological innovations such as the world’s most efficient flexible solar panels, made with both Spanish and American technology, what is being creating a great interest on companies and people who visited the house and it represents a significant breakthrough in the architectural integration of solar systems. “We wanted to overcome the idea that a solar house is a traditional house with solar panels on top and a lot of technology inside. Our project is a full solar house, a new generation of building that visitors have come to appreciate”, says Daniel Ibañez, co-director of the project.

The project was carried out with the collaboration of a large group of companies, led by Endesa, Schneider Electric, Visoren, Roca, Santa & Cole, Vinçon and Nani Marquina. 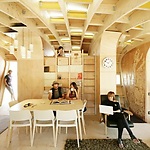