Park Supermarket is a recreational and educational park, right in the middle of contemporary urban life, in which the globally produced food that is generally on offer in supermarkets is being grown and sold.

The park consists of greenhouses, vegetable gardens and orchards in which all components of locally produced products—such as kiwis, mangos and even rice—become visible, tangible, and experience-able. Park Supermarket is planned for the metropolitan parks in and around the big cities in the Netherlands' Randstad metropolitan area.

Why is this a good example of sustainist design?
Park Supermarket is a genius example of sustainist design, as it explicitly represents localism, connectedness, and proportionality as primary characteristics of mainstream culture in the era of 21st century sustainism. By symbolically placing food growing facilities right in the middle of urban life, awareness will be raised about food production and consumption. This will allow people to feel more connected to what they consume as it is being produced locally. The visibility of the production process, in turn, will make tangible what it takes to produce our food and may lead to people's consumption behaviour to become more proportional. 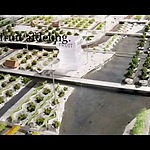